There is something not quite right with the cat.

Posted on February 9, 2013 by Tracy Lundgren 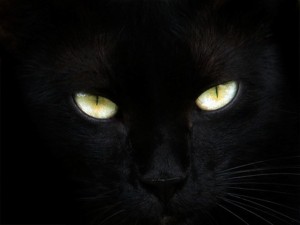 Something really STRANGE is going on with our cat.
I witnessed the most bizarre cat behaviour last night that I have ever seen and it gave me the willies.

A bit of background here.
Our cat, who’s name is really “Snickers” has always been the most laid back, calm, gentle cat I’ve ever come across.
Totally Mr Cool calm and collected.

He was bought by my eldest daughter when she moved out of home, but throughout the years of her gypsying around the country doing her free spirited thing, well, he ended up with us.
He’s totally comfortable around dogs, sometimes even choosing to sleep with them and many times I’ve seen him rub up against them like he thinks he’s one of the pack.
Just a really lovely cat. Sometimes a little nervous around strangers but as soon as he gets a head scratch he just loves you to bits.

So recently, only a few days before we left for our trip to the Philippines, our eldest daughter returned home to settle here a while, before she embarks on the next phase of her life journey, whatever that will be.
It was a timely arrival because we needed someone to take care of the animals and mind the house while we were away.

As soon as we left weird things started happening in this house. If you aren’t aware, we have been sensing that there is a spiritual presence here. You can read about some of it in this post – https://tracysite.wordpress.com/2012/11/10/things-that-go-poke-in-the-night-among-other-things/

I didn’t realise that this was my eldest daughters first encounter with things of the paranormal nature and to be honest, with the exception of a few things , well….it’s easy to dismiss stuff and convince yourself that perhaps these experiences are more a product of an over active imagination more than anything else.
I believe in the supernatural, BUT, I have a logical brain too that more often than not seeks rational explanations, first.
It feels better to understand things, rather than not, let’s put it this way.

Anyway, so we flew off on our trip and almost immediately my daughter started texting us and facebooking us saying she was hearing “chairs scraping” and “footsteps” and candle flames were flickering madly when there was not an open window in the house….and that she was very aware that she was “not alone”.
One night she even reported that the ghost was “touching her”.
Wow, I thought, because my daughter is a bit like my husband in that she is VERY logical, and quite the opposite to myself and my other daughter who frequently reside in the floaty ethereal, off with the fairies realms of our brains.
I just didn’t expect that SHE would sense or experience things to the level that she did.
As it turned out she was actually quite petrified by all these things going on, understandably, because to be honest, especially NOW, I’m not sure I’d like to stay in this house by myself.

One night we receieved a text message saying that she was totally freaked out by the cat.
It was something like, “The cat was just sitting on the end of my bed, his eyes big as saucers, tail swishing like crazy and he suddenly opened his mouth really wide, like lions styles, and then full on ATTACKED me!”
To be honest we laughed. Lion styles?
I just thought, maybe he’s just having one of those playful nights, as he does, when he’s “full of ippicornies” as my mother would say. I have no idea what this means, but it’s like “full of mischievous energy”.
I thought maybe the wide mouth thing was a yawn, and that the “attacking” was just rough play, at most.
I’m sorry to say that I completely misinterpreted her text and didn’t really think too much of it, knowing that she was feeling a bit on edge here and liable to be misinterpreting things because of her heightened nervousness.

Last night my daughter sat on the floor and the cat came up to her for a head rub. He’s been extremely affectionate lately.
He was getting right into it….head moving against her hand, this way, and that….Pushing right into her in that “Oh this is so delicious, I’m in heaven….don’t stop, don’t stop….it feels soooooooo good!” mode, when all of a sudden, no warning he just lunged and attempted to BITE her on the arm!
What the?
I was shocked, because this was so unlike him, and not just a playful “Ok, lets get a bit rough and tumble here” thing….It was like an actual grab with claws out and BITE, to hurt!

My daughter jumped up on the chair and I got up from mine to walk around to observe the cat so I could see his face and eyes , trying to decipher his body language.
“See!” said my daughter.
“I told you…look at his eyes, they’re like saucers just like that night when he did the lion thing!”

Instead of walking away in a huff, as disgruntled cats do, he was now turned, had moved closer to the chair she was sitting on, legs tucked up under her, and I could see his eyes, and I tell you what, I have never in my life seen anything like it!
These were NOT the crouched down, getting ready to pounce mischievous saucer eyes that all us cat owners are quite familiar with….
These were PREDITORY eyes.
Alien eyes….completely transfixed FOCUSED eyes with an intent in them that made the hair stand up on the back of my neck.

I was right there, standing next to the chair my daughter was seeking refuge on, but he completely ignored me and focused all of his energy entirely on HER.
You could “feel” it…his energy completely changed and he was well and truly “after” her.
My daughter grabbed a cushion to put between her body and him but in these mere seconds you could see his exact intention – he was set out to GET her!
Just like that, he sprang from the floor, leaped up onto her and once again attempted to BITE her on the arm!!!

I probably did the wrong thing in this situation because it could have escalated things, but without thinking I reached across and swatted him on the butt and yelled “SNICKERS! NO!!!!!”
Cushions fell, my daughter leaped up…the cat let go of her arm and dropped to the floor, STILL with that really freakish look on his face he stood there for quite a few moments , transfixed, staring up at my daughter with possessed eyes. I reckon, if I hadn’t of been there, scolding him, he would have launched yet another attack on her!  He eventually stalked off.

What on EARTH was that!!!!??
I simply can’t describe this scenario well enough in words. You had to be there to actually FEEL the energy in the room change. The energy coming from the cat.
It was NOT “our cat”.
Not the gentle laid back, sweet as pie fuzzy wuzzy loving creature as we know him.
He acted like a true Demon cat!

Never ever before has he acted this way towards a person, let alone my daughter who has visited and stayed with us on many occasions.

I’m quite afraid of him now. Totally shaken by his behaviour and demeanor.
Don’t know what to expect next…

My daughter was almost in tears when she once again explained that night when he did the mouth wide open lion styles thing and attacked her in the same manner on the bed.
It wasn’t a yawn she said.
It was like – See how BIG my teeth are!!!”
I am lion, see me roar – silently.
Cats just don’t DO that.
They may, if threatened, growl and posture and puff themselves up big, spit snarl and throw a few cat king fu moves, but they don’t sit there silently stretching their mouths wide open and then leap upon people in a totally unprovoked intentional attack!
Lucky for her she managed to pull the quilt up over herself to prevent being hurt and afterwards ran out the room and locked him in there until he “calmed down”.
This time her story gave me goosebumps. It’s taken on a whole new meaning to me now.

I’m not sure what to do.
He seems perfectly fit and healthy in every other way and very quickly after this incident he returned to his normal happy, relaxed self.
He actually kept coming back to my daughter rubbing his head on her legs, miaowing, acting all lovey dovey like nothing happened.

So…..come on you cat people, please…
What do you make of this?
Suggest a rational explanation, or else …. can you recommend a good feline exorcist?
I want this beast banished, and my loveable Snickerdoodle back.

Oh and, things seemed to settle down in the house upon our return from our trip.
My daughter , like me, after some time has passed, was beginning to question these things. Look more for the rational explanations.
But then I went downstairs one day – it’s a separate area to the main house where we make candles and I have my music and craft rooms.
There on the floor were two boxes containing all our mini melt molds, completely tipped up with molds scattered all over the floor.
Not only that, but around the corner in my music room where there is a high shelf on the way where I have put a variety of knick knacks, some of those were on the floor too.
My daughter didn’t report any earthquakes when we were gone.
She didn’t even go DOWN there.

Just too many things that make you go…..”Ok….what is going ON here?”

I am a people watcher,life observer, nature lover, spiritual seeker loving this crazy wild ride that life is taking me on. I am still a blank piece of paper waiting to be filled and that is good.
View all posts by Tracy Lundgren →
This entry was posted in animal behaviour, Cats, Family, Fear, haunted, Paranormal, Pets, Supernatural and tagged anxiety, cat aggression, cat attacks, fear, paranormal, Pets, spooky, supernatural, Weird cat behaviour. Bookmark the permalink.

19 Responses to There is something not quite right with the cat.