From Menindee to Wentworth,Renmark and Mildura.

Posted on August 15, 2017 by Tracy Lundgren
The next leg of our journey was supposed to take us to Mildura where we planned to drive out to Mungo National Park to see the Walls of China. Unfortunately due to bad weather predicted, and ultimately as it happened, the roads into the National Park ended up being closed. I was so disappointed as it was to be, I’m sure, another highlight of the trip.
We decided to travel down through Poontarie on the dirt road leading to Wentworth. The lady in the supermarket at Menindee told us the road condition was “fabulous” and she was right! Compared to the roads in the National Park in Menindee this was like driving on clouds. I did have a bit of a chuckle though at the road leading OUT of Menindee before we hit the dirt. Talk about having had some repairs done.

The scenery along this route was fairly ordinary. Poontarie itself, well, blink and you’ll miss it. I did stop and take a photo just as we left the “town” though (signposting the town) because it looked pretty surreal from that position.  Imagine the time it took to erect that car on a pole – in the middle of nowhere for such a tiny town?

Somewhere along that route too there were a couple of bra and shoes/boot tree’s too. I posted this photo on facebook and some of my American friends were a bit perturbed by it. Maybe they don’t have the same sense of quirkiness over there? Maybe this sort of thing is considered littering over there? I stopped to have a look and was surprised to see a pair of roller blades hanging on the boot tree. First time I’ve seen that.

Didn’t take all that long and we were in Wentworth. I was sad to slowly see the red dirt disappearing as we entered more farmland like country. The rain had begun by now so morale hit a bit of a low by this point. The weather…feeling a bit tired, feeling frustrated that plans were changed due to circumstances out of our control… I was kind of feeling that it would be a bit down hill from here to home. (But I was wrong!)
We stayed at a caravan park out of town in Wentworth which was for some reason hit by a plague of hairy caterpillars. A bit of a drive to and from town but quiet and right on the river.  I didn’t really enjoy this spot because although from the pic it looks ok, it was one of those caravan parks where there is no privacy hedge – or barrier of any sort between sites.  I really dislike that situation…where you are looking straight into the windows of your neighbours van.  Luckily the park was not all that busy. 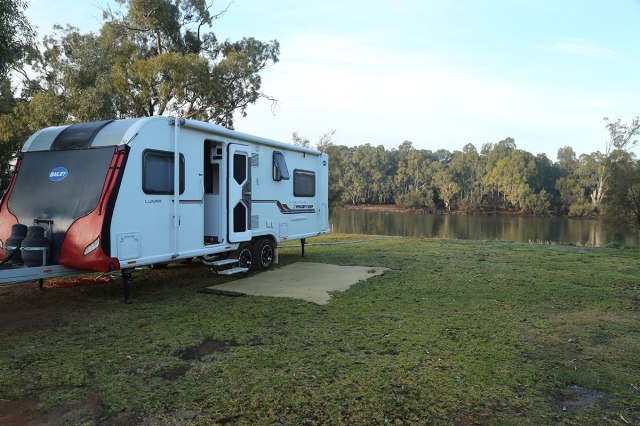 We had to travel out to Renmark the next day as my husband needed to get something done to the HF radio and the only guy that could do the job lives out that way. Although it was totally gloomy and rainy Renmark looked like a lovely place and I’d be interested in going out there again and having a good look around.
We stopped in at a really lovely cafe in Renmark recommended by “Dutchie”- an old guy who has a second hand/antiques store next door. He was a bit of a likeable character. His claim to fame that he was of Dutch parents but born in a prisoner of war camp in Vietnam. His shop was so dimly lit you could barely see to get around – all cost cutting due to the horrendous power prices in South Australia.
The food in the (Cinnamon Grove) cafe was DELICIOUS and the quaint ambience, the other guests who we ended up inviting to our table and chatting with made for a lovely experience.
I gave their Facebook page a Like as it really was good food, service and just a nice little place to browse through as it has a gift shop as well. https://www.facebook.com/Cinnamon-G&#8230;

The drive back to Wentworth was long and tedious in the rain but I stopped a few times when it cleared a bit to photograph the stormy skies and one nice little jetty in the water. 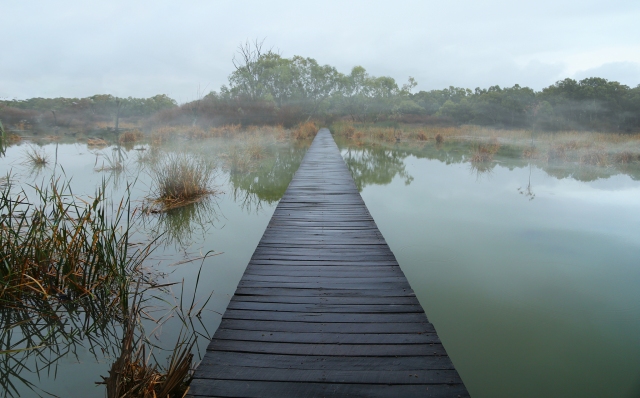 One noteable part of this journey was being stopped at the checkpoint to have our car searched….for fruit as we crossed into South Australia. We saw the signs about fruit fly but oh my, were they SERIOUS about it, even checking in our glovebox, boot and back seat and we saw them going in and searching peoples caravans! I was frantically checking to make sure that some errant mandarin from the days before hadn’t accidentally fallen into the mess in the back seat! I have no idea of what the fine would be but just being caught with a piece of fruit I’m sure would turn these very serious people into very scary people! 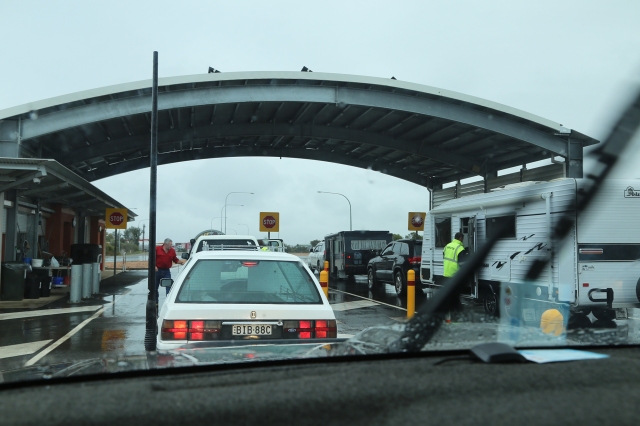 We didn’t really spend any time in Mildura as we were keen to try and drive somewhere out of the rain. A shame really because I’m sure there is a lot to see here. Next time!
I did snap this picture as we were driving across a bridge. I thought it looked like a Clampets houseboat. Apparently it’s owned by the Chook man, who goes up and down the river in it, with his chickens on board….and a whole lot of other “stuff” by the looks of it. He invites tourists, for a donation of course, to have a look at his floating abode, so I’m told. It’s a wonder it DOES float!

I am a people watcher,life observer, nature lover, spiritual seeker loving this crazy wild ride that life is taking me on. I am still a blank piece of paper waiting to be filled and that is good.
View all posts by Tracy Lundgren →
This entry was posted in Australia, life experiences, Nature, photography, scenery, Travel, travel blog, Weather and tagged Australian towns, Caravan parks, scenery, travel, weather. Bookmark the permalink.