We just arrived home yesterday after a three week trip which entailed visiting places such as Lightning Ridge, Broken Hill, Mildura, Griffith, Junee and Sofala.   This is the route we took from Kilaben Bay in Lake Macquarie, NSW.  I’ll be putting our trip reports up in parts.

Our first stop of interest was at Old Baan Baa school which was a great little camp spot – you literally sleep on the school oval and there are very clean showers and toilets available to use as well.

All the buildings are open for you to have a look through which is interesting.

The woman who runs the place – Karen, is a real character who can TALK!  If you stay there expect to be entertained by her tales which can last anywhere up to an hour as she certainly has the gift of the gab – but her stories are great!

She was telling us about a guy who had stayed there previously for a few days.  The only part of him not tattoo’d were his eyes she said.  A little bit on the odd side.   When he left he’d forgotten a small Persian type rug that he’d hung over a fence.  He messaged Karen to ask if she had found his “magic flying carpet”.   Karen replied that she had and that she had safely stored it away in case he revisited.

To which he replied “ These are the GPS co ordinates  for my flying carpet – please put them in and the carpet will fly back to me.”

They finally agreed that it would be better and safer for the carpet if it was put away for safe keeping until his next stay.

There is a pub good for a meal across the railway tracks – oh, yes, the only downfall as a camp spot are the trains that come through.  It didn’t really bother us too much though and we didn’t even hear them through the night.

At only $5 per person per night this is definitely great value, and Karen is worth every cent.

On our first evening there I wanted to do a little drive around the area and take some photo’s.  The afternoon light was looking nice but I couldn’t see much of any interest to photograph until I spotted some horses in a field.

To gain some height I was balanced on the step on the side of the car with my camera when a ute pulled up and the two men in it had a conversation with my husband, which he recounted to me afterwards.  Apparently they pulled up and said in an almost conspiratorial way ” You want a horse?”   My husband laughed and said no…we didn’t want a horse.  “You want a goat?”  they offered instead.   Only in the country hey.  Safe to say we drove away without purchasing any farm animals.

The drive from there to Lightning Ridge has got to be one of the longest most boring unscenic roads I’ve ever been on.  Dead dull boring so absolutely nothing of great interest was photographed that day.  We did start to see emu’s though out in the scrub. 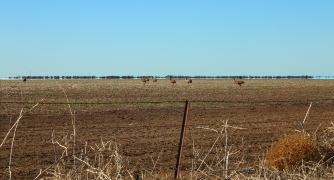 At one point – the most exciting point for me photographically, I spotted a whole mob of Emu which I stalked over rabbit hole infested ground to try and get a decent shot of.

This was our first experience in Lightning Ridge but I must say, our expectations were sadly underwhelmed. 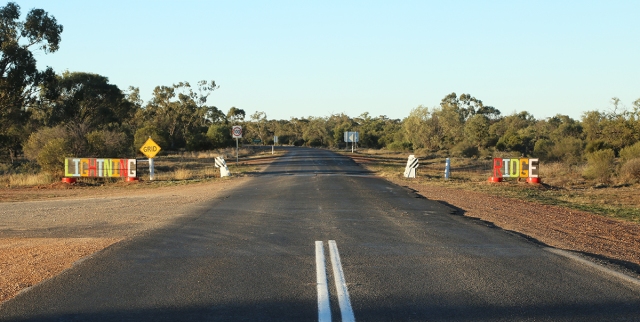 It’s ok if you want to buy some opal, because there are dozens of those kinds of shops, and sellers setting up stalls in the main street, and even in the grounds of the caravan park we stayed in.

For us the vibe of “let’s see how much we can scam out of the tourists” was present and we had to laugh at the “Car Door Tours” – There are four of them.  Red, yellow, blue and green car door tours marked by a corresponding car door with that colour door marking the very short trail , which basically are just existing dirt roads through the shanty town of residents which make up Lightning Ridge.   The roads themselves were not very long – we could have done all four in one day.  There were a few points of interest along the way on these roads, most of which you had to pay to go into, or were surrounded by visitors cars making them hard to even photograph.  I must say though…we did not purchase some sort of leaflet I think it was?  which described each point of interest.  Perhaps if we had it would have made what we saw make a bit more (interesting) sense.

I suppose it’s a bit quirky in a Steptoe and Son kind of way.  It’s like all the Clampets have landed in the same spot and spread their junk around, dug lots of holes and dubbed it a town.  This was our impression anyway.

Here are a selection of images from around the town. 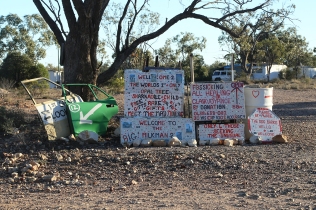 I found this building the most interesting visually.  It was built for a movie set.

I must say though, the locals didn’t seem to go out of their way to make you feel welcome.  I was wary of getting out of the car when I saw the sign warning about mad dogs, and even less inclined when I saw what looked like a noose.  I suppose they just have a special sense of humour out there? 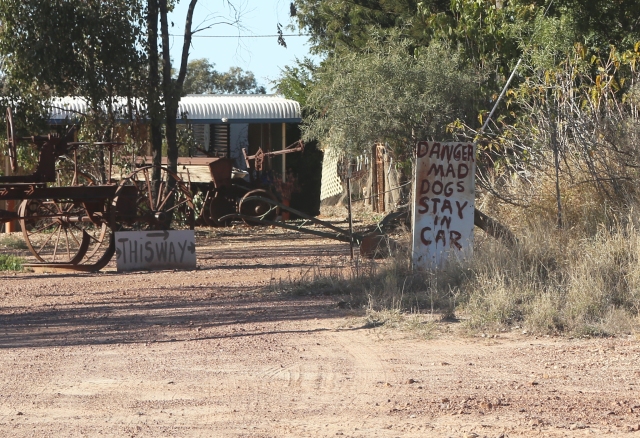 We went to visit the hot Artesian pool – and I envisioned this semi natural location , you know, with reeds and steam and looking all a bit like a bit of a spot of paradise in comparison to the rest of the town, but it turned out to be a fenced proper “pool” – tiny, and overrun by mainly aged people soaking their aches and pains away.  It didn’t appeal to us whatsoever.  Shot through the bars in the fence I felt like I was a peeping tom spying on pensioners.

The Opal Caravan park – mostly dirt – I didn’t see any grass) we stayed at was huge, very clean, amenities were great and the spaces we very large which was great as you didn’t feel you were on top of your neighbours.  Two women also do a comedy hour there every evening and from the sound of the laughter it must be good – unfortunately both nights we came home halfway through and all the seats in the shed where it was held were full.

So all in all, it was a long detour- and such a boring drive out of our way to visit Lightning Ridge.  I’m glad we did it, because now we know, but it would have felt less unsatisfying to us had it been a place we needed to pass through on our way somewhere.

I am a people watcher,life observer, nature lover, spiritual seeker loving this crazy wild ride that life is taking me on. I am still a blank piece of paper waiting to be filled and that is good.
View all posts by Tracy Lundgren →
This entry was posted in Australia, caravanning, Life, life experiences, photography, scenery, Travel, travel blog and tagged Australia, Lightning Ridge, Quirky, travel. Bookmark the permalink.