I never realised just how lucky I am to have such a patient husband until a recent road trip I took with my daughter and the two grand kids to the snow…where there WAS no snow (Weep- it eluded me yet AGAIN!)

You see, my daughter is the sort of person who wants to get from A to B in the quickest time possible, by the shortest route possible.

I understand.  The five month old has just recently learned how to shriek like a banshee in indignation every time the car slows, even a little bit.  It’s kind of like having hot pokers repeatedly jabbed in your ears.

But I think even without the hot pokers my daughter would still be the same…Lets just GET there!

I’m not used to travelling like that.  I have been spoiled by my dear husband who has always been so accommodating, and whether it be me with a video camera, or a camera, or just me wanting to get out and say hi to the cows…well, he always stops for me, and there IS no great rush.

So there I sat in the car, one lone dead tree after another whizzing by.  How I mourned those trees, because, if you aren’t somehow aware, lone dead trees are simply irresistible to photographers!

Their stoic and stubborn fortitude, their proud victory against wind, rain, drought and all that the elements can throw at them in their beaten gnarly glory! They scream, “ I was here!  I AM still here!”

Lone dead trees are simply visual poetry to the photographer.

Take a look at this one, from our UK trip. It’s quirky…got a sense of humour, a bit of a larrikin tree I’d say, in it’s hey day. 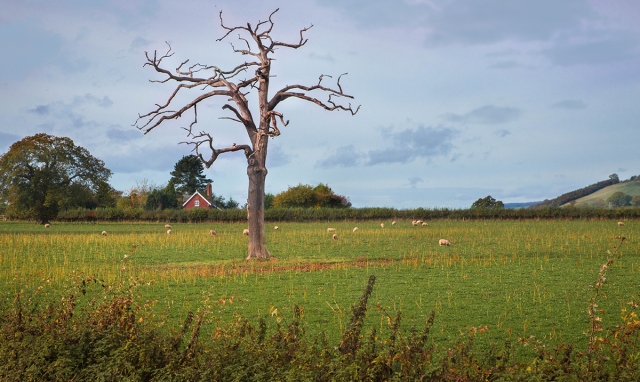 My daughter doesn’t understand.  As I sat grieving the trees, whimpering softly as yet another fine specimen disappeared in a blur she said…

“Do you just like dead trees because you’ve got a black thumb?”

Of course, I couldn’t expect her to stop every five minutes…  Little hot pokers you see.  And besides, we were off to see the SNOW (which didn’t exist).

I resorted to trying to take photo’s from the moving car.  This is never easy, and tinted windows make it even harder.  I did snap this…which was interesting because it was the winter sun, in broad daylight.  The window tinting I think did something to the image and made it look almost like a night time shot.  Strange, but I kind of like it. 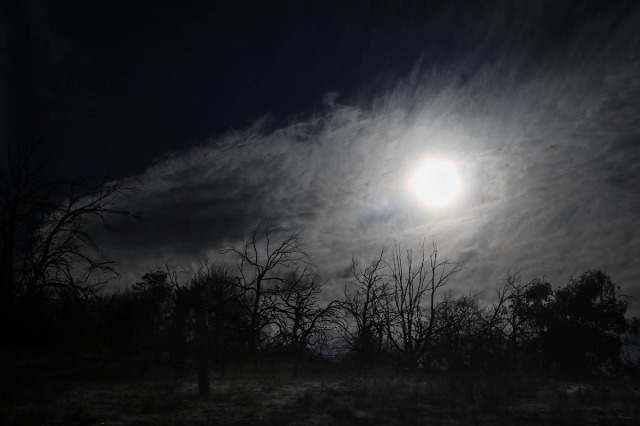 Sometimes I just refused to look out my window.  I entered a state of denial.   “There is NOTHING nice out there to photograph” I told myself and stared straight ahead…  but even that sometimes became interesting. “Oh…look at that nice loooong road ahead!” 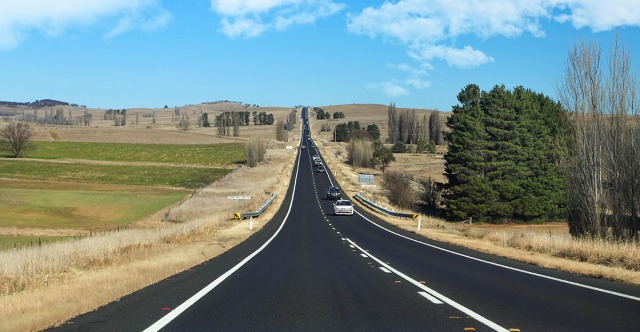 My finger must have become jittery because I even managed to accidentally take a few pictures of my daughters lap.

So… We did have a lovely time, despite the absence of (real) snow.  My three year old grandson got to play in the fake snow, we went on some lovely walks, had far too many fattening treats to eat, saw some of the wildlife (Emu and deer, birds…) and just generally hung out together, which was really nice!

On the last day on the way home though, early in the morning we suddenly drove into thick fog and then a miracle met my eyes.

A winter wonderland suddenly appeared in front of us. It was AMAZING, because I’d never seen anything like it before.  It kind of looked like snow, but I knew it wasn’t!  It was like a really heavy frost that hung off every blade of grass, every wire, every leaf….Like magic this land of ice was suddenly THERE coming out of the fog..and stuff it, hot pokers in the back seat or not I KNEW I just had to take photo’s of this!

Oh be still my heart…Just take a look at what I saw! 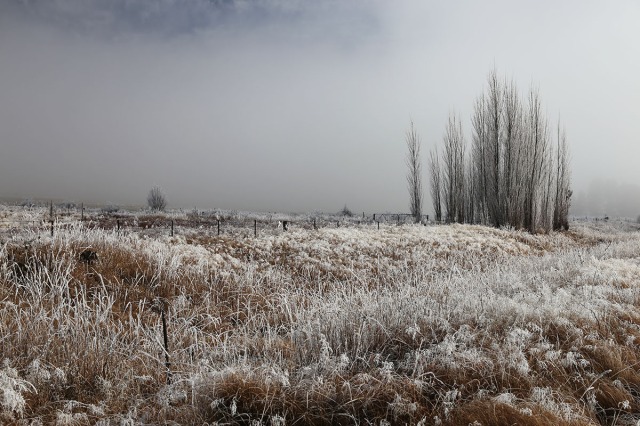 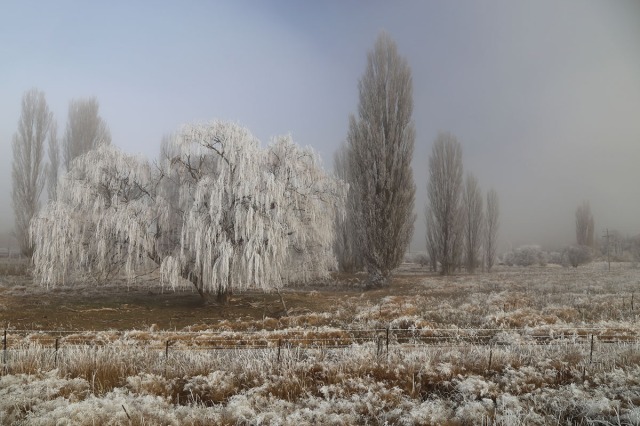 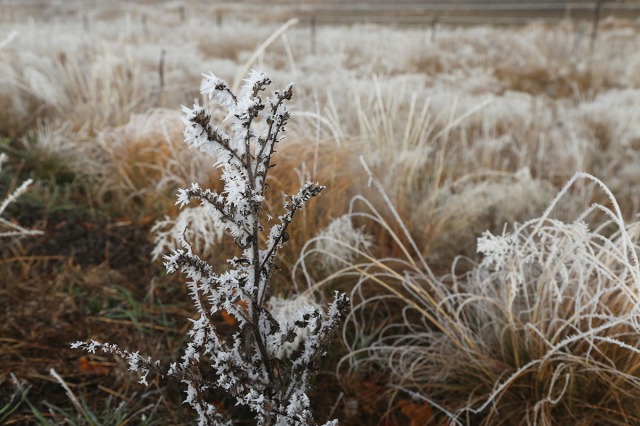 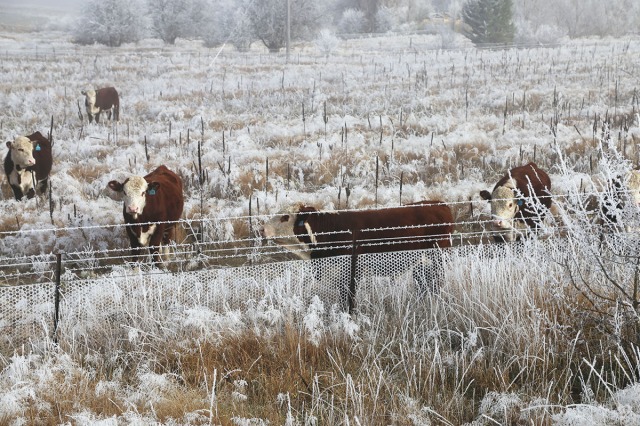 I think even my daughter was impressed by the scene. Hot pokers in his car seat?… meh, not so much.

I have now learned that this phenomena is called a Hoar Frost.  It’s when “water vapour goes directly to a solid state, skipping the liquid stage altogether. The frost clings and grows on any type of exposed surface, including trees, wires and bushes. “

PS….This is Hot Pokers trying carrot for the first time. 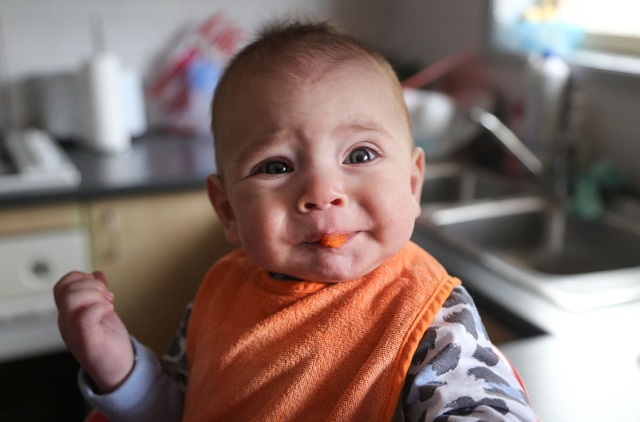 I am a people watcher,life observer, nature lover, spiritual seeker loving this crazy wild ride that life is taking me on. I am still a blank piece of paper waiting to be filled and that is good.
View all posts by Tracy Lundgren →
This entry was posted in Australia, daughters, Family, grandchildren, Humour, husbands, life experiences, Nature, photographers, photography, scenery, Travel, Uncategorized and tagged driving, grandchildren, Hoar frost, photography, road trips, travel. Bookmark the permalink.