I was here! (In Newcastle actually.)

Posted on February 4, 2014 by Tracy Lundgren

Yesterday I had to accompany Shai (my 18 year old) for her first day at TAFE where she has enrolled in a graphic design course.
This may change though as she also applied for a fine arts course at Uni which we will find out about soon, in which case she might have to drop the TAFE course…
Decisions, decisions – oh to be young again and have your whole life ahead of you. Exciting!

Anyway, Shai is…a nervous child lets say. 🙂
Unlike me at a much younger age, gallivanting all over the place on public transport, Shai doesn’t like catching trains by herself to new places.
So I went with her once, just to show her it’s really not all that complicated.
I think I must frighten her because if I see a train and I’m not sure if it’s the right one I just get on it anyway and then ask people.
She doesn’t like talking to strangers either.
lol!

Never mind, she will get over this lack of confidence.
She will have to because I’m not doing that again!

To bide my time while she was at Tafe yesterday I armed myself with the camera, of course and went in pursuit of some good photographic opportunities.
The only thing was, I wore the wrong shoes.
It was too hot for sneakers (hate when my feet feel hot) and my good comfy, supportive open toed shoes need the soles gluing back on (I’ve worn them so much!)
So I chose a flat….dead flat pair but they have no support so within the first hour of walking my feet were hurting.
With a whole day to kill I had to do something so I popped into some second hand stores and found the ugliest, but VERY thickly padded/supported shoes I could find.
My feet were in heaven (even if they were ugly) for the first hour, but then, because the shoes looked almost new, the top bit began rubbing my foot causing a blister.
Off I went to the chemist to buy band aids, which I had to reapply several times!
By the time I got home my whole body ached (this camera is HEAVY!) my neck was sun burned, and my legs and feet were killing me!

It was an interesting day though.

This is how it began.

Walking back from leaving Shai at the TAFE I ventured into a big park, hoping to find public toilets there. Alas, there were none!
But I spotted these glorious Morton Bay fig tree’s, which I love because of their delicious twisted tree trunks.
I am pleased with this pic….out of all that I took I think this is the best shot. 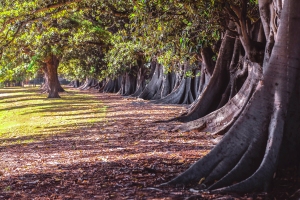 And I am so very flattered because just this morning someone on Facebook asked if they could purchase this print so she can turn it into a wall hanging for her office!

These tree’s just always look so magical because of the twisted contours of their trunks.
I even like this one (but I am mad on tree’s – it’s not everyones thing.)
I can imagine this as some sort of abstract painting even… 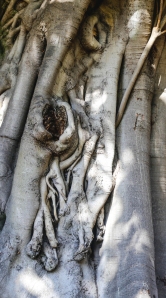 With not much to photograph in that area I decided to venture further afield into the city of Newcastle.
Unfortunately by then the light was too harsh so nothing much appealed to me but the very first thing I caught sight of whilst walking through an arcade was this….
“How much is that doggy in the window?”
How adorable is he?

I spotted the owner of the store shoo him inside out of his nice little spot in the sun, while she locked up the shop and went off to buy lunch or something.
As soon as she was out of sight he hopped into the display window looking right at home.
I immediately walked over and began taking a picture but as soon as passers by spotted me they too rushed over and soon a small crowd of oohing and ahhing people were taking pics on their phones.
He had his own paparazzi going on. AND he was loving it. I could tell.
He does pole dancing on Tuesdays. 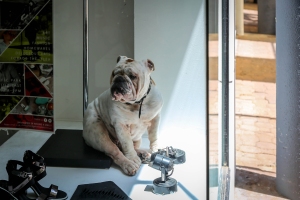 So then I started venturing up very steep streets.
Aggh, but it was so hot by then and even though I could see interesting old buildings WAAAAAY up high on the hill top, I was just too hot to go clambering up there to take pics.
I did see a few very colourful lane ways though.
Like this. 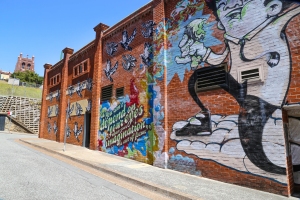 That one somehow looks like it has permission to be there somehow…
But there were others that didn’t.
I actually found myself squeezing through broken chain wire fences to get into areas to photograph graffiti, wishing I had someone with me because some of the areas were a bit isolated and felt rather “dodgy”. 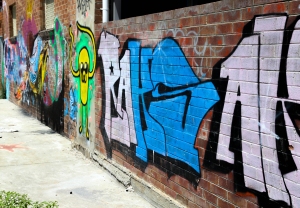 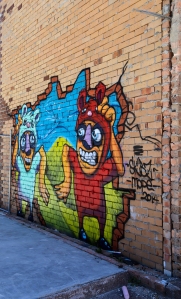 I’m not really a fan of vandalism but sometimes it inspires some arty thoughts….and visions.
Imagine if the ugly could look like this? 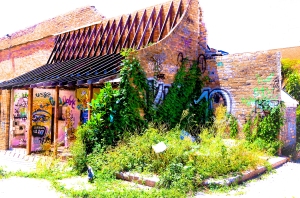 A tad overdone 😉 but that was just me playing in Lightroom – a new program Shai has just introduced me to.
Complicated!

Other colourful sights I saw along the way were these…
I loved this blue rusted fence. 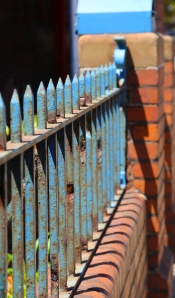 And these very colourful sun lounges down by the foreshore.
I think they are usable “art”. 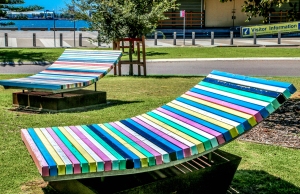 Too hot for me though as I am naturally a shade seeking creature.

Then I trudged (yes by then I was trudging…my legs felt like lead) down other laneways and down backstreets till I found this rather quaint alleyway.
I loved the stone wall and the very old stone stairs.
Reminds me of what it must have looked like in the convict days. 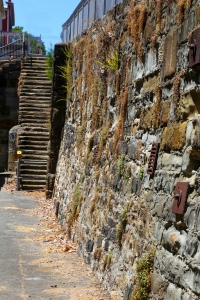 in that same alley way, of course there was more graffiti.
Interestingly in this doorway the shot I took, though not particularly good, showed up all these “orbs”.
Of course it must have been dust…but oddly the shot I took seconds before in almost the same position had no orbs. 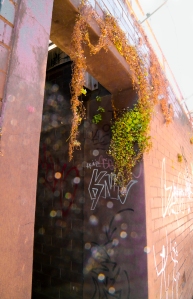 I loved these windows above the shops. 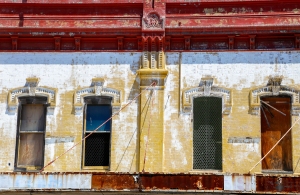 This one looks a bit spooky somehow. Not sure if it was an old theatre or an old hotel? 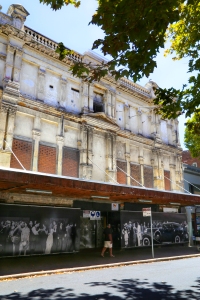 This building is still in use…I think it’s got something to do with the college there?
Looks nice and ornate in it’s gnarly “old -ness”. 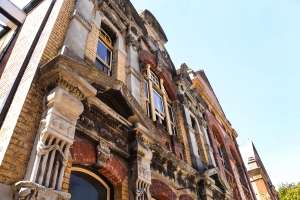 Then, as I walked past this window I couldn’t help but think that us humans are all the same….
We all need to leave our mark, whether it be by vandalising with graffiti, carving our name into a tree or writing it in the dust on a window.
“I WAS HERE!” we’re all saying.
Perhaps I’m even saying it too by taking pictures. 🙂
Or you by writing poetry…or you by your stories…. you by your art… 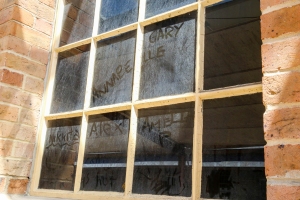 I am a people watcher,life observer, nature lover, spiritual seeker loving this crazy wild ride that life is taking me on. I am still a blank piece of paper waiting to be filled and that is good.
View all posts by Tracy Lundgren →
This entry was posted in Art, Arty farty, Australia, Creativity, Life, life experiences, Nature, Parenting, photography, society, teenagers and tagged graffiti, Life, making our mark, Morton bay fig tree's, Newcastle, old buildings, parenting, photography, sore feet, teenagers. Bookmark the permalink.

16 Responses to I was here! (In Newcastle actually.)