Why Aussies should celebrate Christmas in July, not December.

I have lamented on the ludicrousness of our Christmas celebrations in the Australian summer time before.
Bah humbug you say.
Well, there’s good reason ok!
I will explain.

Christmas- as a date on the calendar really has very little to do with the birth of Jesus, so I have been reading.
Even the historians agree that it is unlikely that Jesus was born in the middle of winter – shepherds tending their sheep out in the fields and all that – like the bible reports. Not likely.

As no one really knows when Jesus was born anyway, December 25th might have just been picked out of a hat for all we know.
Some say that it is the ancient Roman celebrations of the Winter Solstice, with great feasting and much merriment – around the 22nd Dec that has merged to combine celebrations of the birth of Christ.
Apparently the Romans placed an enormous amount of pressure on the early Christians to rejoice along with them, and around the time of the fourth century they began to celebrate Christmas around the same time.
It is said that “It was inevitable that Christians should make a connection between the rebirth of the sun and the birth of the Son.”
Ok, well all reasonable if you live in the Northern hemisphere.
Winter – feasting, what a good idea. When you NEED the extra blubber.
I think winter is a time for celebrating EVERYTHING. The cool….the gentle light… bleakness… I love winter!
In summer…it’s just stupid.
I mean really ridiculous when all one feels like is a lettuce leaf nibbled on under the steady whir of a ceiling fan.

So….if you really want to celebrate the birth of Christ and celebrate by feasting with great merriment, and you live in Australia…I’m sure He wouldn’t mind if it’s done in July when we can TRULY feast well in his honour.
What do you think?

As I hung my wreaths the other day a pine cone fell off one.
Picking it up I thought to myself….how silly. Pine cones are just not around in summer – here.
They begin falling around Autumn – I believe. Completely off with the timing of Christmas.
And yet….we hang wreaths adorned with pine cones – something one would collect just before July!

Yule logs.
You’ve seen them. You might even have a nice recipe for one.
Well, where did they come from?

“Yule was celebrated by the Norse in Scandinavia around the time of the winter solstice by bringing in large logs for the fire, in recognition of the eventual return of the sun. It could take as much as twelve days for the log to burn down. Meanwhile, the Norse would feast. The holiday usually lasted through January.”
Fact is, the biggest log they could find was brought into the house. Often so large part of it stuck out the room.

Well who here in Australia feels like burning a stupidly enormous log on the fire in December?
But still….out there… the notion of yule logs abound.
Makes perfect sense. (But now… in July…..?)

Ok, the tradition of the Christmas tree.
I have read that the ancient Romans NEVER cut tree’s down and dragged them into their houses to decorate. (I hate the idea now of chopping down tree’s for Christmas.)
How did this whole thing even start anyway? (I know the Germans claimed to have come up with the idea too.)

“Long before the advent of Christianity, plants and trees that remained green all year had a special meaning for people in the winter. Just as people today decorate their homes during the festive season with pine, spruce, and fir trees, ancient peoples hung evergreen boughs over their doors and windows. In many countries it was believed that evergreens would keep away witches, ghosts, evil spirits, and illness.

In the Northern hemisphere, the shortest day and longest night of the year falls on December 21 or December 22 and is called the winter solstice. Many ancient people believed that the sun was a god and that winter came every year because the sun god had become sick and weak. They celebrated the solstice because it meant that at last the sun god would begin to get well. Evergreen boughs reminded them of all the green plants that would grow again when the sun god was strong and summer would return.”

Interesting!
But here we’re already IN summer. The plants are already growing like crazy (come see my backyard!) especially our darn lawns!
I personally want to the Sun God to die….a horrible death, but that’s me.

Last night while in Bunnings I saw a cute wooden lawn decoration of a Snowman holding a sign that said “Let it snow!”
You couldn’t get more ridiculous than that now could you?
Where do these decorations come from?
The ice skates….the mittens, the Christmas boots, the snowmen….
They are all from the Northern hemisphere. (Well, made in China really) but the ideas, the notion of this brrr…..freezing cold Christmas where things like iceskates, mittens and Snowmen make perfect sense!
Over here it would be more fitting to hang cans of anti perspirant….sunscreen and thongs from our Christmas tree’s.
And gold spray painted cicada shells (oh my the Christmas bells have been ringing this year!)

Stupid.
I was going to make some of THESE to sell on our market stall. 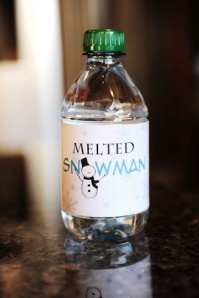 I made these a few years ago.

The conclusion to my argument…

It just makes so much more SENSE to swap December for July.
We could FEAST so much more…
Party so much more fervently.
We wouldn’t have to face the nightmare queues at the checkout.
Things would be cheaper. (They really do hike the prices up at Christmas!)
Pine cones, mittens and mulled wine would be so much more appropriate.
In some parts “Let it snow!” would be totally acceptable.
Yule logs would be the done thing.
It would be cosy and comfortable and no one would stink of BO.
There would be no flies or mozzies.
Jesus would forgive us.

3 Responses to Why Aussies should celebrate Christmas in July, not December.