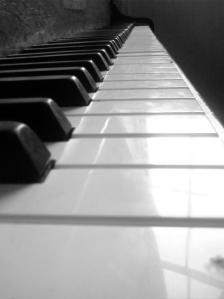 I have not been to a music concert in years. Some people may find that strange, since I am a novice songwriter/musician and it’s so much a part of my life on a personal – keep me from going crazy level.
The thing is, I find the process of tinkering around writing music meditative. Being in that “zone” cancels out all of my own mind noise and calms me, forces me to focus. Writing it is relaxing and enjoyable.
But LISTENING to music makes me analytical and because I have an inkling of how it works, and a small amount of knowledge about how it’s done, it makes the listening process more complicated than actually WRITING it.
Only a small amount of music makes me feel relaxed and actually enjoy the listening experience, without the analytical part of my brain kicking in….too much.

Ludovico Einaudi’s music does that for me.

He’s been dubbed as being the inventor of “atmospherica”, and that does suit what his music is all about.
It’s gentle and soothing, yet can build to frenzied powerful climaxes.
You can imagine it set to imagery….imagine it in film….or you can just get lost in it.
In essence his piano playing sounds really simple. The motifs are really not all that complex and very repetitive, to the point where you think…”Oh…I can write something like that!”
Right.
(I’m going to try though!)
But there is just something mesmerizing to me with his music and it resonates a lot with my quiet alone music making times where I’ll just sit, having come up with a repeating pattern and simply get lost in the repetitiveness of it. But that’s it…I never DO anything with them though, because I don’t know how.
Ludovico takes those patterns and somehow weaves them into bodies of music that take you somewhere.

As an 18th birthday present for our daughter Shai, we bought two tickets to Ludovico’s first time ever performance (and only one show) in Australia at the Sydney Opera house last night.
She is an absolute devoted fan of his and spends hours learning to play his pieces, and really I think it’s his music that has really inspired her the most.

There was something electric in the air as the whole audience sat silent listening to him play.
The vibe, the energy in there was indescribable.
The stage was in almost complete darkness with only a spotlight lighting the grand piano where Ludovico sat, with his back to the audience! I couldn’t believe they had set up that way.
I wanted , at least to see a side view….his fingers on the keys.
I wonder why he chose to have the stage set up that way?
Was it because he didn’t want ALL the focus on him – rather sharing the stage with his six piece band?
Or was it to create an atmosphere of mystery?
Dressed in all black he kind of disappeared into the black of the piano.

Nothing was said…he simply walked on stage and began playing piece after mesmerising piece with no opportunity for applause until after the fourth of fifth song (I think?)
But when the audience finally found that opportunity they were MOST expressive in their appreciation.

The whole performance was flawless. Each musician was multitalented, frequently swapping instruments for others. The cello’s and violins were excruciatingly exquisite, especially when they reached their crescendo’s.
In fact, as I listened I thought to myself….”this is really orgasmic music”.
The foreplay of the gentle introductions, teasing in their light fingered repetition, wandering away, to return to the repetitions…slowly building, and building, becoming frantic, and yet more frantic then reaching unbelievable high points, often drifting back down to soft reminiscences of the introductions, then sighing to a close.
I think Ludovico must be an excellent lover.

He got two standing ovations.
The audience went crazy when he finished…..so after five minutes of everyone in the hall standing and clapping and cheering “MORE!” they returned to play two more pieces….but the audience was greedy and once more the room thundered with cheers and whistles and enthusiastic applause.
I think Ludovico and his band were a little taken aback by the response to be honest, but they had no more to play.

The best part of the night, for me, was the fact that I was surprised to see that after the show Ludovico would be available to sign his CD.
Can you imagine my daughters excitement!
She was besides herself because just to be at his concert was exciting enough for her but to actually MEET the man?
Funny…..most teenagers would be swooning over some pretty boy rock star, yet my daughter is awestruck over a man old enough to be her father, who plays instrumentals.
I love that.

Standing in line waiting for him to sign her CD she would NOT stop babbling.
“What will I say to him?”
“Will I give him a hug? Will that be awkward? He’s so much shorter than me.”
“Should I tell him – I love your soul – because he has a beautiful soul making music like that.”
“Will that sound too stalkerish?”

In the end, when we finally reached the table, my daughter suddenly became dumb struck, as I anticipated, lol!
He did turn to her and ask where her name “Shai” originated, but she was incapable of speech, so I answered for her and then told him we though the concert was AMAZING, which made him smile and thank us sincerely, and then I asked if he would be returning to Australia to which he said yes….probably in February.
YES!
And then, my daughter, still rendered speechless by standing so close this man she practically idolises, reached down and gave him a hug.
I thought that was pretty cool, and brave of her.
And for the rest of the night she was positively buzzing with the euphoria of the whole evenings excitement.
It was an experience that will stay with me.
A truly moving and enjoyable performance and we will definitely be seeing him again if indeed he does return in February.
I think another of my daughters will be thrilled to know he is coming back so next time maybe she will also join us.

Here are some examples of Ludovico’s music….but I must say the live performance just blows any of his recordings away as far as I’m concerned.
There is just something about the energy and passion of all those musicians together in a room.

The first one is Ludovico doing a solo piano performance. (Love this one)

This is one of the songs they played last night. Not my favourite but I can’t find the ones I liked the most from last nights performance anywhere on the net.

I am a people watcher,life observer, nature lover, spiritual seeker loving this crazy wild ride that life is taking me on. I am still a blank piece of paper waiting to be filled and that is good.
View all posts by Tracy Lundgren →
This entry was posted in artists, Australia, Entertainment, Family, Life, life experiences, memories, Music, teenagers and tagged atmospheric music, composers, experiences, instrumentalists, Ludovico Einaudi, Music, music concerts, teenagers. Bookmark the permalink.