Which way should the camper trailer face? 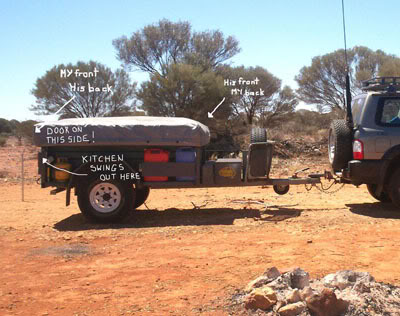 One of THE most stressful aspects of camping is always the moment when we arrive at a campsite and have to decide which way the camper trailer should face.

It’s very important to me that the trailer should be adequately positioned in order to maximize our comfort for the duration of our stay, particularly in regards to where the sun will set as there is nothing worse than having the hot afternoon sun beating in on where you are trying to sit and relax (and prepare a meal)

My husband and I have had many explosive moments during this critical time and it was on one specific trip that I discovered exactly WHY he behaves like a complete ninny, unable to follow my simple directions.

This is something I wrote about the setting up experience some years ago.

We had just pulled up at a nice little campsite where there was a body of water and immediately our eight year old son disappeared through the long grass to go and investigate – water and mud of course being a boy magnet.
When my husband asked the inevitable question – “Which way should the camper trailer face?”  I told him…

“Put it so the front is facing the water” – the reason being, which I thought was logical – so we could keep an eye on the boy as well as have our main eating/sitting area positioned so as to NOT have the hot late afternoon sun beaming in on us.

Moments later he starts backing the trailer in then gets out of the car and unhooks it and tells me we will have to push it around.
I’m not sure why we have to do this, as it seemed logical that he would just back it in a little further and the front would open out towards the water, as I had suggested.

Now, there is a couple set up in their caravan next to us, watching us, and I really hate that because we become a great source of entertainment during these set up times.
Nothing more amusing than observing someone else’s frustrated domestic over cheese and biscuits at happy hour.

So there we are pushing and pulling the trailer – well, I am really just standing there with my hands on it not knowing what the heck my husband is doing because suddenly the trailer is positioned sidewards and I say to him…..

“But why have you turned it this way? When we open up the tent it will be sitting on top of the fire pit!”

He is beginning to look flustered and says something about the tree being in the way so it HAS to go this way because it won’t fit under the tree, and “why didn’t I listen to him in the first place and have it the way HE had suggested!”

He continues to push it this way and that, not really making much progress and I begin to worry that the darn thing is going to end up IN the water.

“Richard…….it was really simple…You just had to back it in a little way the way you had it and then everything would be fine.” I say.
(I feel like I’m dealing with a mentally challenged person here.)

“Now I have to hook it back up to the car to put it where you want it!” he says through gritted teeth.

I’m really not understanding his whole demented thought process at this moment, but not wanting to make a scene in front of our delighted audience, I tell him through equally as gritted teeth…

“Ok….well put it where you like…I really don’t care either way!”

It’s at about this point that I would like to punch him.

“Why is it so difficult to understand my instructions?” I’m thinking to myself as he angrily reverses the car and makes a big fuss about re hooking the trailer back up.
In his anger he starts driving, forgetting to put the wheel of the trailer up so it scrapes noisily in the dirt.
He then gets out of the car, realizing what has happened and blames me for HIS error.
I can see his blood pressure rising by the minute.

I’m standing there watching him reverse the trailer, wheel safely up this time, towards me, but he’s doing it so that the trailer is coming in at an angle therefore making it that if we opened the tent part up the BACK would be facing the caravaners FRONT, which to me seems quite snobbish at a campsite.
Side on is ok – you still have your privacy to sit and eat but to have your “back” facing their “front” just doesn’t seem very friendly….especially if you are to be there for two nights and have already exchanged pleasantries.
Meanwhile the caravan people are sitting there evidently thrilled at our antics, quietly chuckling over their glasses of wine.

Now I’d like to punch THEM in the face.

“What ARE you doing?”  I ask my husband, lowering my voice hoping they can’t hear.

I’m quite baffled and more than a little irate at this point.

“Just back it in and the front will be facing the water!”

“You said you didn’t want to be facing the afternoon sun!”  he says…

“It WON’T be if you put it where I told you…….the FRONT facing the water!” I hiss.

I feel as though I am speaking to a Martian.  What does he not understand about what I am telling him!

Suddenly, and somehow it dawns on both of us….

What I am referring to the “front”, and have been, for all these years, is actually what he calls the “back” of the camper trailer with his logic being that the “front” of the trailer is the part that hooks up to the car and the “back” where, when we set it up is where the door to the tent is and the kitchen opens out.

This to me is ridiculous because when we are talking about setting it up it seems logical to call the “front” the place where you go in and out of the tent and have your awning up – like a front verandah and do all of your “living”- cooking, eating etc.

Why on earth would you call that the “back”?

We argue for a few minutes over this point with him refusing to refer to the “back” ( in his eyes) as the “front” so I give up and just tell him to put the bloody thing wherever he bleeping bleep well pleases!

All in all it takes about thirty minutes to find the final resting place for the camper with both of us feeling very hot and bothered.

We still argue about this back/front thing even years later.

I understand his reasoning – skewed as it is, but in MY eyes we are actually towing our home on wheels BACKWARDS so the point remains…
When setting up camp, ,where the door is- HAS to be referred to as “the front”  and until we can agree on this we will continue to become confused and have these domestic spats, much to the delight of other campers.

Perhaps hubby should remember the little thought for the day we once saw posted up on a notice board in a town along our travels.

“Marriage is a partnership where one person is right and the other is a husband.”

I am a people watcher,life observer, nature lover, spiritual seeker loving this crazy wild ride that life is taking me on. I am still a blank piece of paper waiting to be filled and that is good.
View all posts by Tracy Lundgren →
This entry was posted in Australia, camping, embarrassing, Humour, husbands, Marriage, Travel and tagged Australia, camper trailers, camping, embarrasing, frustrating, Husbands, marriage, travel. Bookmark the permalink.

8 Responses to Which way should the camper trailer face?