My husband and I have very different decorating tastes.

Some of the things HE likes, that I don’t are; lime green and black geometric patterned floor rugs, aboriginal dot paintings, enormously overstuffed marshmallow lounges- designed to digest its occupants, nostalgic bric a brack from the seventies and loads of electronic equipment with nightmarish tangles of leads running everywhere that are impossible to run a vacuum cleaner over.

I go to great lengths to make things “look nice” in the house.
I don’t buy anything floral, to keep my husband happy -that’s his pet peeve.
Nature inspired and “leafy” I am just BARELY able to get away with (no fake plants though!) but don’t show him anything even vaguely resembling a flower or he’ll faint.

I try to keep it simple these days. Kind of earthy… with a bit of ethnic flavor thrown in.
In the bedroom I’m trying to create a tranquil clean fresh feel. Uncluttered and monochrome.
I like matching things, having a black and white leaf print quit cover and complimentary grey, black and white throw cushions on the bed along with plump European cushions ….large white bedside table lamps and subdued coloured banana leaf wrapped mirrors on the walls.

But my husband just doesn’t seem to notice this delicate balance of feng shui I am attempting to achieve, particularly in the bedroom, and will do the most irritating things – like put a bright pink plastic barbie cup on the bathroom sink in our slate grey ensuite.

We have had HUGE arguments about the barbie cup.

“There is a little bit of gay in you I’m sure.” I said angrily when the damn pink cup KEPT returning to the ensuite sink after I hid it, multiple times, in the kitchen.

He seems to have an unhealthy preoccupation this cup.

“You can’t have a GLASS rinse and spit cup in a bathroom!” he says.

“Darling, you’re all grown up now. It’s ok, you can use glass. It’s fine. I use glass utensils all the time now that I’m middle aged.”

I can’t remember the last time anyone died from rinsing with a glass tooth mug?

Another irritating thing he does is to ALWAYS leave a couple of tissues carefully folded into neat little squares on top of his bedside table.

(I can’t work out how he can be such a slob MOST of the time but has these weird little pedantic habits.)
I’ve never actually seen him use these tissue squares but they are always there,(all around him, even in the rest of the house!) messing up the feng shui – disturbing the balance… Disturbing ME.

And he puts his beanie (woolly head cap thing. I don’t know what other countries call them. My husband is bald and his head gets cold.) over the top of the bed end post.

Like…yeah, perfect bedroom décor.
A sweaty woolly head cap just adds the aesthetic final touch when it comes to dressing a bed.
All the decorators are doing it.

And… stinking sneakers UNDER the bed!
Ahh what glorious perfume!
Combine that with bacon flavoured crisps consumed just before bedtime along with his regular evening emissions and there you have the perfect combination of tranquil aroma guaranteed to induce a relaxing night’s sleep.

He’ll throw his clothes on the floor, have crap all over the bedside table and yet there must NOT be a wrinkle in the sheets.
He just can’t sleep on “wrinkly sheets”.
The bane of my life is hearing him moan and complain about the surface contours of the bed.
He – the man who hits the pillow and is unconscious.
He will even try to pull the wrinkles out of the fitted (which never really fit do they?) sheets while I am still IN the bed…asleep even!
I got so sick of it that one time I bought yards and yards of stretchy T-shirt material and TIED it to the mattress so it was perfectly wrinkle free. (The lengths women go to keep their men happy in bed!)
I can’t tell you how much of an issue in our marriage the “wrinkly sheet” thing is.

Lately there has been a regular addition of a metal water bottle sitting on his bedside table. You know, the ones you would take hiking?

“Why is there a water bottle there?” I have asked.

“You told me I should drink more water!” he says crossly.

“What’s wrong with a drinking glass?”

The poor dear man, along with his wrinkly sheet aversion, seems to have developed a troubling glassware phobia.

I can’t believe this! I swear this is the God’s honest truth.

I just went to find the pink Barbie cup to take a photo of and lo and behold, look what is sitting on the bathroom sink! 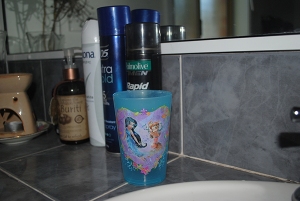 Who did I marry?

I WAS going to title this blog “He’s a Barbie Bloke.”  I may have to reconsider.

PS – It appears I hid the pink barbie cup SO well that even *I* can’t find it now.

I am a people watcher,life observer, nature lover, spiritual seeker loving this crazy wild ride that life is taking me on. I am still a blank piece of paper waiting to be filled and that is good.
View all posts by Tracy Lundgren →
This entry was posted in Australia, Bedroom, Humour, husbands, Life, Marriage and tagged Barbie, decorating, humour, Husbands, Life, tooth mugs. Bookmark the permalink.